Over the past month, Milwaukee police officers have suddenly become targets of gunfire. Earlier this week, I got a “Shelter in Place” alert on my phone after an officer was allegedly shot resulting in a foot chase that ended after the suspect shot himself:

On Thursday, another incident occurred when a policeman was shot during a welfare check:

I try to stay neutral about the police on this blog. Most officers spend most of their time doing work that benefits the community. As great as it is to have a force of people willing to put their bodies on the line to protect the safety of others, corruption is real and many liberties have been taken with that power.

There’s just something really odd about this latest shooting. When the injured officer emerged from the hospital, we was dressed head-to-toe in Cincinnati Bengals attire:

Notice how some of the supporters showed up with clothing that featured the quote “MPD Strong” with the Bengals logo. This is Packers country…who put in the time and effort to come up with this idea, make a design, and have the shirts made and distributed, all within about 20 hours? 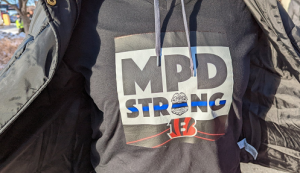 It’s odd to say the least. What’s even stranger about this is that the officer’s name is Herb Davis.

Herb Davis was the name of an American football player who came long before the Bengals. He played his only NFL games for another team from Ohio – the Columbus Tigers. Consider how “bengal” is a type of tiger. The Year of the Tiger begins on February 2nd.

The Bengals play in Cincinnati, Ohio, which syncs up with Milwaukee.

The police officer is 26 years old. Herbert Allan Davis died on a date with Primary numerology of 126: