In 1997, comedian Chris Farley, whom this author believes was one of the funniest men to ever grace our screens, passed away at his home in Chicago, Illinois.

Farley grew up idolizing comedian John Belushi, an original cast member on Saturday Night Live. Unfortunately, his emulation of his hero did was not limited to his career – Chris and John both succumbed overdoses at the age of 33, following years of addiction struggles.

Belushi was born on January 24th, the date written 1/24, matching the Ordinal value of Chris Farley:

Both men were born under the sign of Aquarius:

Traditionally, Aquarius has been ruled by the planet Saturn. The day of the week named after Saturn is Saturday – the night that Farley and Belushi ruled the airwaves.

Adding all nine digits in the Magic Square of Saturn yields a sum of 45. Each individual row and column add up to 15:

Farley’s death fell exactly 142 weeks after the release of his first feature film (or 263 days after its anniversary): 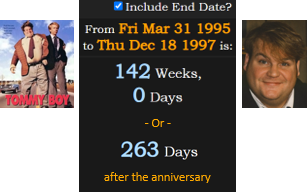 Chris died on December 18th, which was the second day of Saturnalia, an ancient Roman festival celebrated by sacrifice.

The 35 value of Saturnalia in Reduction reminds us of the date March 5th, which is when Farley’s idol Belushi died:

The last episode of Saturday Night Live to air before Farley’s death was hosted by Helen Hunt: 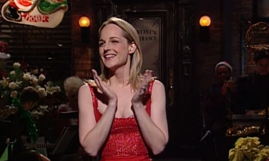 She was born exactly 35 weeks before Chris:

The last name Hunt has matching gematria with Saturn, as do her H.H. initials.

Helen Hunt’s age on the date of her appearance also points us to the incredible riddle further connecting Chris Farley to John Belushi. First, notice how Farley’s full name sums to 126 in both standard Reduction methods.

John died on a date with Tiny numerology 18:

Farley’s death isn’t only connected to John Belushi through the numbers – consider that he died at his apartment in the John Hancock Center.

The famous building was named after American founding father John Hancock, who was born on 1+23+37 = 61. His 1/23 birthday matches the Ordinal value of John Belushi:

Chris’s apartment was on the building’s 60th floor

Hancock is best-known in America for the fact that he was the first man to sign the U.S. Declaration of Independence. This was so significant, that John Hancock is actually used as slang for the word “signature”.

Farley died there on a date with Primary numerology of 146 and 56:

The building was completed on May 6th, written 5/6:

Hancock was only 56 years old when he died:

His signature on the Declaration of Independence was the first of 56 added to the document:

Helen Hunt, the last SNL host prior to Chris’s death, was born on June 15th, which can be written 15/6:

Christopher Crosby Farley and his hero both died at the age of Thirty-three after an overdose of Drugs:

The premiere of SNL wrapped up a span of 30 years, 330 days after Lorne Michaels was born, and John Belushi died 333 weeks later:

Hancock died while he was the governor of Massachusetts, his home state. 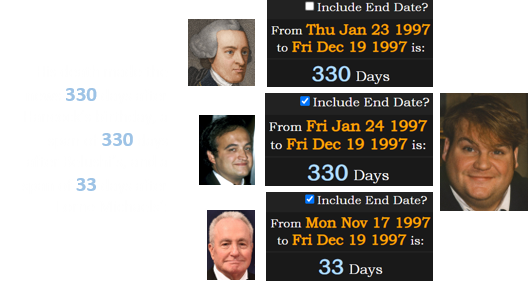