This upcoming season will be the Tigers’ 122nd in franchise history. Kimera Bartee died on December 20th, or 12/20, a date with Primary numerology of 73:

He died during Saturnalia.

Year of the Tiger

The Chinese Year of the Tiger begins on February 2nd of next year.

A baseball is made up of 108 double stitches.

There are 162 games in a Major League Baseball season.

Specifically, it will be the year of the Water Tiger. Recall the “Water Tiger” ritual with Tiger Woods earlier this year.

Year of the Tiger has matching 216 and 81 gematria with Kimera Bartee. 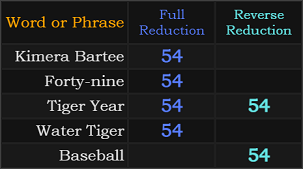