Chargers tight end Donald Parham had to be carted off the field after dropping a touchdown pass on tonight’s opening drive of Thursday Night Football. The play itself didn’t look so bad – Parham’s head hit the ground kind of hard, but not so hard that you would expect some sort of paralysis.

Immediately after impact, a Chiefs player lands near Parham’s face, which looks like it causes him to put his hands up to protect himself. But then he suddenly looks like he can’t move at all…

Tonight is December 16th, which means Saturnalia is already underway in most parts of the world. The date has numerology of 69:

Saturnalia and Saturn even sync up with Stretcher.

Saturn is an average of 888 million miles from the Sun

The Earth is an average of 93 million miles from the Sun
The injury occurred 93 seconds into the game: 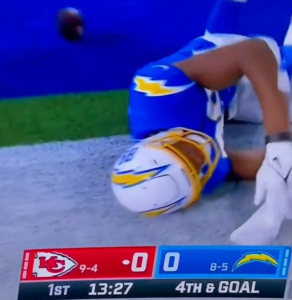