One of the most frequent links I put on this Blog takes you to my post on the number 1331 and how it is representative of the “Total Solar Eclipse” code.

The reason that eclipse is so important is not just the remarkable connections to the Latin/Jewish cipher, but because the path of totality was entirely over Land.

For a long time, I’ve been saying that it’s the only Total Solar Eclipse we’ve found that was entirely over land, which was true. However, I thought it would be smart to actually do a deep dive and see if it was really the only one in the entire canon. This time, I went to work and searched by global coordinates rather than dates, like I normally end up doing.

Some of these may be “cheapies”, as you’ll see, and it should be clear why the 1331 Eclipse still stands out among the rest.

NOTE: For “B.C.” years, I will be using the number of the year as it is listed in the Five Millennium Canon. However, the actual year number would be one higher (e.g. -100 is actually 101 B.C.)

One of the first things you may notice is that all of these eclipses occur during late fall / winter. This is because eclipses in this part of the world that occur during summer months will have an inverted curve, and there is simply too much water south of this area for the path to not intersect. This eclipse that falls in 2541 A.D. is about as close as you’ll get. 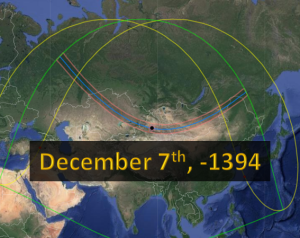 The path is neat and nearly symmetrical, a trait which is largely-dependent on how close to the solstice it is. This could be a pretty interesting Eclipse – after all, it’s the same date as Pearl Harbor. However, given how this date is nearly prehistoric, there’s probably not much more to it. 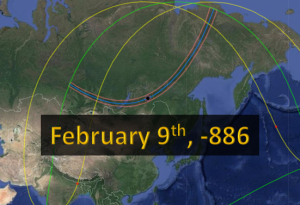 This belonged to Saros 26. Although we cannot be sure exactly how many eclipses are in this cycle, we do know that there were just 9 more after this, meaning it was on the tail end.

It took just over an hour for this Eclipse to pass over the Earth, and Totality was just 1:13. It does pass over Lake Baikal in Russia, which some people might call a “major” body of water. I’m only counting Seas and Oceans though. 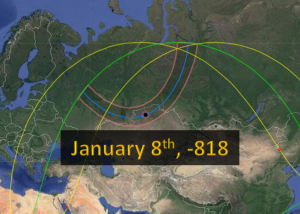 Just 68 years later, another all-land eclipse snuck into place over Russia. Although this eclipse lasted a decent 2:13, it took less than 45 minutes for the Moon’s umbral shadow to pass from one end of the path to the other. 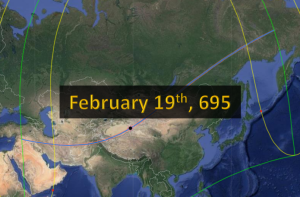 This short 65-second Total Eclipse has the coolest path of any on this list. Beginning in Syria, it passes through Iraq, Iran, and Afghanistan on its way to China, splitting Mongolia in half before ending in far northeastern Siberia. It took over two hours to complete its journey, even dodging Lake Baikal along the way. 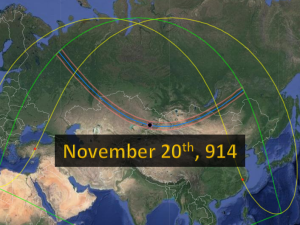 It took about 75 minutes for this Total Eclipse to pass over the Far East in 914 A.D. Those in its path saw up to 2:04 of totality.

The final two eclipses on this list actually belong to the same Saros cycle. We begin with our classic 1331 Eclipse, which dotted the earth for just over 93 minutes. The Totality phase lasted up to 3:09 – the longest of any on this list. 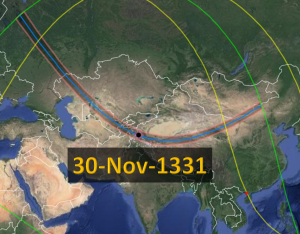 This was the 54th eclipse of Saros 102. Just 91 years later, the 59th eclipse of that same cycle once again traversed only land. 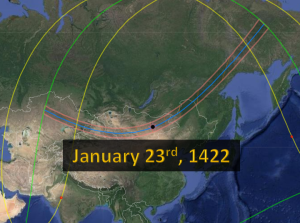 The Total Eclipse of 1422 A.D. lasted 2:54, with the umbra moving out of Siberia just under 90 minutes after it first showed up in Kazakhstan.

The 1331 Eclipse still has the longest phase of Totality of any others on this list, although the one from 695 took longer from start-to-finish.