Today, there was a truck attack at the Waukesha County Christmas Parade about 10 miles from my house.

Just yesterday, I was refreshing my memory about the Nice truck attack from 2016, as my history shows: 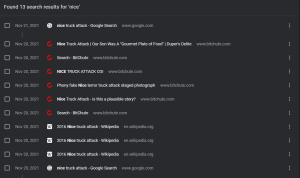 Why was I looking up a truck attack before today’s truck attack? No, I didn’t have anything to do with it. It’s because I was provided a numerology clue that the 2016 attack was aligned with today’s date.

My main man Bobby is literally some kind of wizard. Here’s what he sent me yesterday (click to enlarge):

The Waukesha Christmas Parade was the 58th annual edition, on the eve of the 58th anniversary of the assassination.

The date November 22nd was mentioned – however, November 21st was 1957 days after the Nice truck attack with the end date included:

Waukesha is a suburb of Milwaukee, who won the World Series in 1957. The current US Postmaster General, Louis DeJoy, was born in 1957. He assumed the role on June 16th, written 6/16.

Gematria supports the idea that the JFK Assassination, which happened on 11/22, would be aligned with a Vehicle ramming attack.

The name of the suspect in custody is Darrell Edward Brooks Jr.

The fact that this was a Christmas parade is no coincidence either. SUV attack sums to 12/25, which is the date of Christmas.

On Christmas day, two years before the JFK assassination, it is revealed that Barney lives at 411 Elm St on the Andy Griffith Show.

4×11 = 44. That was the 44th episode of the series. JFK won the 44th U.S. Presidential election and died exactly 44 years after a major Annular Eclipse that began in Texas, where he died.

The governor of Wisconsin is Tony Evers. Notice how he is not to be confused with Tony Evers from the Rocky films:

Bobby had brought up the film Rocky IV two days prior to his other message:

Today is the anniversary of Rocky IV‘s premiere

Rocky IV was a topic because Dolph Lundgren, who was born in 1957, was in the film, which came out in 1985. We just had the death of rapper Young Dolph, who was born in 1985, followed by the massive Adolf Hitler riddle with the Rittenhouse trial and Austrian vaccine mandate.