This makes sense. Had I not just gone in for my Smallpox booster shot last month, I’d probably be dead from Smallpox. I re-upped on my Tetanus shot late last year but…crap, I haven’t had my Polio booster in like four years! WILL I BE DOOMED? </s>

This is a perfect example of how everything we’ve come to understand about medicine and proactive immunotherapy has been flipped upside-down. Of course, this is all on purpose – by making the fraud as evident as they have, it continues to feed those of us who understand that this has nothing to do with saving people from some virus, so that we move further in one direction while the flock of sheep continue in the other.

I’m not saying we shouldn’t continue to stand for the truth…of course, the truth is what I’ve based my whole life around for 5 years. But remain cognizant of the fact that even the truthers are being manipulated with this information, all as means to continue the divide.

Ever since the beginning, many of us have continuously mentioned how the Johns Hopkins Center for Health, which has been a significant player in the plandemic, “coincidentally” held a Coronavirus pandemic exercise called Event 201 in the months leading up to the “outbreak.” This was the very same day the 2019 Military World Games began in Wuhan, where 5G was first launched, and where COVID came from. The date was October 18th – the same date Colin Powell, one of the disease’s most famous victims in recent memory, allegedly died.

The vaccine that Powell took was first approved for emergency authorization on December 14th, 2020, which was the only date of the year that the Sun’s Corona could be seen on Earth.

Since day one, a key number to the Coronavirus pandemic, which began in 2020, has been 22.

He died 83 weeks after COVID-19 was declared a National Emergency (or 220 days after the anniversary): 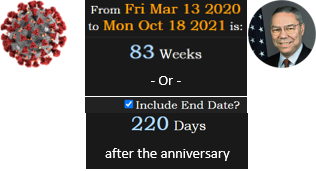 The Coronavirus pandemic was declared a National Emergency on the date leaving 293 days in the year:

Powell died exactly 29 months, 3 weeks before the next time America will see the Sun’s Corona:

The Sun and its Corona are the symbol of The Jesuit Order.

The former US Secretary of State died on a date with numerology of 69 and 33:

69 is also the Reverse value of Saturn.

Powell died 903 days before the next Great American Eclipse. The Magic Square of Saturn has a total sum of 45. It takes Saturn 54 weeks to pass the Sun in the sky. Colin Powell was born on April 5th, written 4/5 or 5/4.

Powell died on 18/10, and 181 is the 42nd Prime number. “Saturn” = 42, “Jesuit” = 42. This connects to the introduction of the Delta variant that I discussed in June. 42 is also a number historically stamped on black people, and Powell was the nation’s first black Secretary of State.