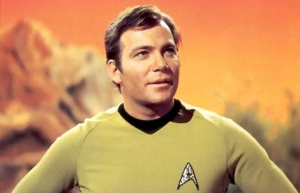 Shatner just turned 1120 Lunar phases old. Blue Origin is owned by Jeff Bezos, who went up himself this past summer on the anniversary of the Moon landing.

The most memorable sidekick to Captain James T. Kirk was named Spock.

The ship Captain Kirk commanded was called the The USS Enterprise. 44 years ago this month, NASA’s Space Shuttle Enterprise went on its fifth and final flight, all occurring in the year ’77.

The creator of Star Trek is Gene Roddenberry, whose full name sums to 274 and 113.

Consider how the other major space opera from the era, Star Wars, was created by George Lucas, whose first film was called THX-1138.

The ship Captain Kirk commanded was called the Enterprise. Gene Rodenberry was present for the introduction of NASA’s Space Shuttle Enterprise, which had its final flight on a date with 113 numerology:

113 is a significant number for space travel. Consider how NASA was founded on a date with Primary numerology of 113:

The Challenger disaster occurred 1:13 into flight. NASA’s 113th launch was the Columbia disaster. Baba Kamma 113a of the Talmud says it’s ok to circumvent gentiles with lies. 113 is the main number of deception. Perhaps I should clarify that while the number 113 is clearly relevant to this event, I don’t think there was anything fake about Shatner’s spaceflight…but that doesn’t mean there wasn’t.

This seems like a pretty good reason to have the flight on the 13th as well:

Picard is a current television series that follows Star Trek: The Next Generation commander Jean-Luc Picard through his retirement. I have to point out how he has the same gematria as former Raiders head coach Jon Gruden, who was also in the news this week. Gruden won the Super Bowl in 2003 on 1/26.

Picard‘s first episode aired on January 23rd, 2020, just one day after the Raiders announced their move to Las Vegas. William Shatner’s spaceflight fell one day after Gruden was in the headlines for resigning from his coaching role.

Shatner’s flight was a span of 20 months, 21 days (or exactly 90 weeks) after the premiere of Picard:

The last Star Trek film was Star Trek Beyond, which was released on July 22nd, or 22/7. Leonard Nimoy, the actor who played Captain Kirk’s most famous sidekick, Spock, died on 2/27.

This also stands out because my last post is about a bow and arrow attack in Norway, who had their largest terror attack on July 22nd, written 22/7. The Jon Gruden story was connected to the 2027 Total eclipse over Luxor, Egypt.

Five Killed in Bow and Arrow Attack in Norway
MLB Playoffs: Intriguing Riddle for the Braves