Joey Jordison was formerly known as “Number One” during his time in Slipknot. His full name was Nathan Jonas Jordison, and he has reportedly died at the age of 46 in 2021.

There are conflicting dates of death in the media and on Joey’s Wikipedia page. Without including the end date, these measurements still both apply.

All Hope Is Gone

All Hope Is Gone is their record on which the song Gematria (The Killing Name) appears: 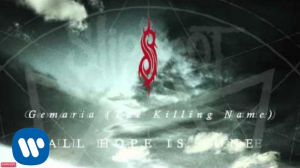 The well-known frontman of Slipknot is Corey Taylor.

Jordison’s death (or his last day alive) was on a date with numerology of 74 and 38:

He was found dead on the 208th day of the year:

July 27th is also 28 days after the anniversary of their debut album, Slipknot:

The name Joey Jordison matches 60 and 66 gematria with All Hope is Gone.

666 appears to be the primary number of the Moon. The relationship is highlighted in the new PDF file I just added today.

Joey’s death fell 159 lunar phases after the release of All Hope Is Gone:

When you write out Thirty-three, it sums to 156.

Joey Jordison was a founding member of Slipknot.

Follow-up on May 26th Mass Shooting in San Jose
Riddle for Angels to Go 50-50 vs. Colorado