The activist group responsible for the banner is called Indecline. How appropriate for a nation whose support for abortion proves our moral compass is in decline. Their logo even features a character with devil horns:

News of their mischief at a Jesus Christ statue falls on a date with Primary numerology of 57, and it’s connected to the National anthem:

This story about a banner being hung over this statue is a numerical riddle connected to the Star-Spangled Banner, which was adopted as America’s national anthem on March 3rd, the date written 3/3. It’s taught that the Crucifixion of Jesus Christ occurred at the age of 33 in the year 33 A.D.

Jesus is the Son of God. The Magic Square of the Sun sums to 666.

Wikipedia lists the statue that was erected in ‘66 as 66 feet tall:

The statue sits atop Magnetic Mountain, which is just one off from 666.

6 and 9 are of course the same digit, just upside-down. 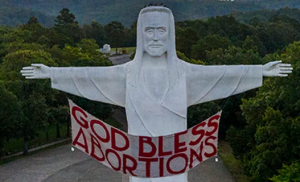 Comically, this article says the statue is both 67 and 65 feet, a clear nod to the 66 riddle:

No surprise to see the Christ of the Ozarks statue in the national news in 2021.

Many people believe Christ’s real birthday is September 11th, or 11/9.

The statue is on the 93rd meridian. The crucifixion occurred on the 93rd day of the year between 9 am and 3 pm. The first man in the Christian Bible lives to be 930 years old.

The site also includes a 4,100 seat amphitheater, reminding us of the initials of Jesus Christ.