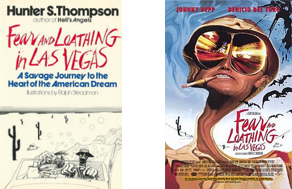 In 1971, Rolling Stone Magazine included a two-part series called Fear and Loathing in Las Vegas: A Savage Journey to the Heart of the American Dream by countercultural author Hunter S. Thompson.

The story was published as a novel the following year. Although talks of adapting the book into a feature film began in the late 70’s, the movie was not completed and released until 1998.

Fear and Loathing by Hunter S. Thompson was published in the year ‘72.

Thompson has alternate birth numerology of 72:

The film was not released until 1998, which is connected to the Reduction value of Thompson’s full name.

Hunter‘s Fear and Loathing in Las Vegas was published on a date with Primary numerology of 86 and 23:

After years of re-writes and casting changes, filming for Fear and Loathing by Hunter S. Thompson finally began in the Nevada desert in August of 1997.

Thompson’s sidekick in the film is Dr. Gonzo, which is a portrayal of Oscar “Zeta” Acosta Fierro.

The film was directed by Terry Gilliam.

The year 1998 was 27 years after 1971, when Fear and Loathing was originally published in Rolling Stone Magazine.

The film about Vegas was released on a date with a Life Lesson number of 54. May 22nd leaves 223 days on the calendar:

This is the Hebrew gematria of Las Vegas, Nevada.

Hunter died 223 days before October 1st, which was the date of the infamous Las Vegas shooting in 2017. In that event, the shooter was in a “Casino” = 223 that turned exactly 223 months old on that very night.

Fear and Loathing was released on theaters on May 22nd, the date written 5/22.

The date May 22nd is written internationally as 22/5.

The police report of Thompson’s death included a curious detail. Hunter had written one line of text that was still in his typewriter, including the date Feb. 22 ’05:

Hunter S. Thompson, the author of Fear and Loathing, was born on a date with Primary numerology of 81:

Prior to killing himself, Thompson wrote about his depression in a poem called “Football Season Is Over.” This has matching 244 gematria with Fear and Loathing in Las Vegas, and matching 116 gematria with Hunter Stockton Thompson.

On top of this, the word Football is a near-supermatch with Las Vegas, Nevada.

The game of football features 22 players on the field for each play.

On the 22nd day of the year 2020, the Raiders officially moved to Las Vegas. Hunter S. Thompson died on 2/20 with the date 2/22 written on his typewriter.

The Raiders’ move was 121 days (or 122 w/ end date) before the 22nd anniversary of Fear and Loathing‘s theatrical release:

The word Counselor was the only one written on Thompson’s typewriter.

The film features Johnny Depp in the lead role. Depp, was born in Kentucky, the same state as Hunter S. Thompson, on 6/9 in the year ‘63.

The movie where he portrayed Hunter S. Thompson came out 347 days after Depp’s birthday (18 days before his next):

Depp was 34 years old for the release, which was Hunter S. Thompson’s age when both Fear and Loathing was published in Rolling Stone, and as its own book.