It’s being reported that Johnny Solinger from Skid Row has passed away from liver failure at the age of 55.

Solinger’s given date of birth is August 7th, 1965, a date with Primary numerology of 99:

After a three-year hiatus, Skid Row returned in the year ’99 with Solinger as their new lead singer.

His death fell on the date written 26/6. The current Pope is the 266th in the history of the Catholic Church. Francis has been the Pope for 99 months:

Francis is the first Pope to come from The Jesuit Order.

The Latin name for the Sun is Sol…
Solinger was a Leo, ruled by the Sun

Francis has Primary birth numerology of 84:

The Pope’s birthday is December 17th, which is the first day of Saturnalia.

The Magic Square of Saturn has a sum of 45:

The date he died had Primary numerology of 73:

In Ordinal, Saturnalia sums to 116, similar to Saturn return in Jewish.

This is the Ordinal value of 19.

Johnny died on a date with Reduced numerology of 19:

Notice how the article has him pictured in a Kum & Go shirt: 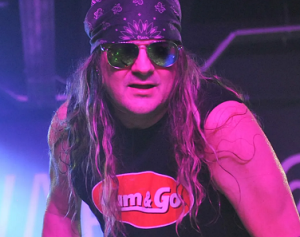 Solinger’s last year in the band was 2015

My friend Jesse was wearing a Kum & Go shirt this weekend that I kept laughing at. I mentioned this to Bobby Simpson, key blog contributor, who said he just happened to see a Kum & Go in Tennessee for the first time earlier in the morning, never having even heard of it before today. Strange day for a sync like this – his uncle passed away this morning, just hours after a great uncle of mine died.