In October of last year, I made this post examining a long three-pointer from Damian Lillard. While the post focuses on a riddle connected to Donald Trump, I made special mention of how the number 13 was coded in.

Lillard’s shot from August 13th went into the basket with 10:30 left in the game. It gave Portland 103 points in the game, which is also Lillard’s birth numerology:

As it turns out, just two days before that game, Lillard made another unbelievable three-pointer towards the end of a game. This shot was also from way beyond the three-point line:

The shot bounces REALLY high off the rim and drops directly in, barely moving the net. The bucket tied the score 130-130 against Dallas: 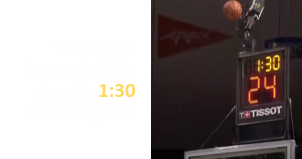 The Trailblazers play their home games in Oregon, which is abbreviated OR.

As mentioned in my other post, Damian Lillard has matching gematria with Donald Trump, the reverse of the digits in Jesus.

In my first post, I mentioned how Trump was 61 days after his birthday, and the game was played on a date with numerology of 61. In this game from two days prior, Damian scored 61 points, tying his career high.

Jesus, the Son of God, is connected to the number 666 through the Magic Square of the Sun:

The name Damian Lillard has a lot of overlap with Jesus Christ.

Damian Lillard was born on the 196th day of the year:

The September 11th attacks were unquestionably a crucifixion riddle.

During the daytime crucifixion, darkness falls over the sky, like an eclipse:

The date of the game had Reduced numerology of 14: