Earlier this year, a major shipping disaster occurred when the Ever Given became stuck in the Suez Canal. The boat was freed six days later.

There are many numerical similarities between the Ever Given blockage and the X-Press Pearl sinking. 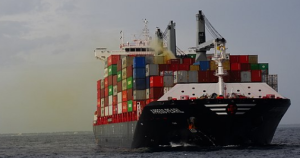 Both incidents appear to be rituals put on by the Jesuit Order, which was formed on 9/27.

The X-Press Pearl sank on the 153rd day of the year:

The Jesuit Order is more commonly called The Society of Jesus.

The Jesuit Order operates in 112 countries