The incident that helped coined the term wardrobe malfunction involved Janet Jackson, who was born in ‘66.

In late March, Lil Nas X began selling his Satan Shoes. A total of 666 pairs were made. 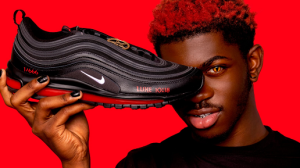 Last night, he performed on the 909th episode of Saturday Night Live:

His Satan Shoes were released on the 88th day of the year:

Lil Nas X had a Wardrobe malfunction when his leather pants split during the song Montero.

The episode was hosted by Anya Taylor-Joy.

Lil Nas X‘s real name is Montero Hill. When combined, this has Ordinal gematria of 232, syncing up with the Latin value of Satan.

Notice how “Luke 10:18” is written on the shoes. Many people believe the true number of the Beast is actually 616. This verse has Ordinal gematria of 616 and a Reduction value of 283.

In Ordinal, Satan sums to 55, as does Lightning and Heaven.

His Saturday Night Live appearance fell 55 days after the shoes were released:

Earlier this year, Super Bowl 55 completed the NFL season. The Super Bowl is where the term “wardrobe malfunction” was first coined.

Consider that the show is called Saturday Night Live, for the day named after the planet Saturn.

He has birth numerology of 131 and 41, matching the Reverse values of The Devil:

Lil Nas X, whose real name is Montero Hill, burst into the music scene in ‘18 with his hit single Old Town Road.

Lil Nas X’s “Satan Shoes” are a modification of the Nike Air Max 97.

This 121 is found in the phrase Satan Shoes, which is a near-supermatch with Revelation.

The shoes were released on March 29th, the date written 29/3, like 293, a number that has matching gematria with Revelation.