Last night during the Cardinals – Mets game, the stadium lights at Busch Stadium mysteriously went dark during an at-bat in the 9th inning.

One announcer commented that he had never seen this happen before. The other said he had, but just as he began to say the lights could take a long time to return, they lit right back up at full strength.

Busch Stadium is in downtown St. Louis, and the St. Louis Arch can be seen from the ballpark. 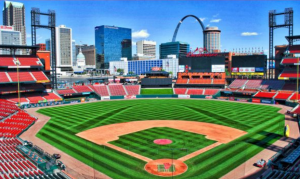 All year, I’ve been discussing the significance of the St. Louis Arch in relation to 2021. The Gateway Arch was built to commemorate east to west expansion in the United States. Because they occur so close to the poles, both of this year’s solar eclipses have the unusual quality of traveling east to west.

The Arch opened on June 10th, 1967, exactly 54 years to the day before the first of two Arch eclipses this year.

Without the end date, the game was 5 weeks, 3 days (or 1 month, 7 days) before the first Arch eclipse:

The Coronavirus is related to this period of significant eclipses for obvious reasons. The Sun’s “corona” is only visible during a Total eclipse.

This game was important to Cardinals fans, as it marked the return of starting pitcher Adam Wainwright from the Covid-19 list.

Wainwright has Standard birth numerology of 119:

He was placed on the Covid-19 list as a precaution on the 119th day of the year:

Opposing pitcher Joey Lucchesi was traded to the Mets on 1/19 of this year.

Furthermore, the name Adam Wainwright matches the Hebrew value of Total eclipse. Consider how he was born on August 30th, or 8/30.

He returned for the Cardinals’ 29th game of the season.