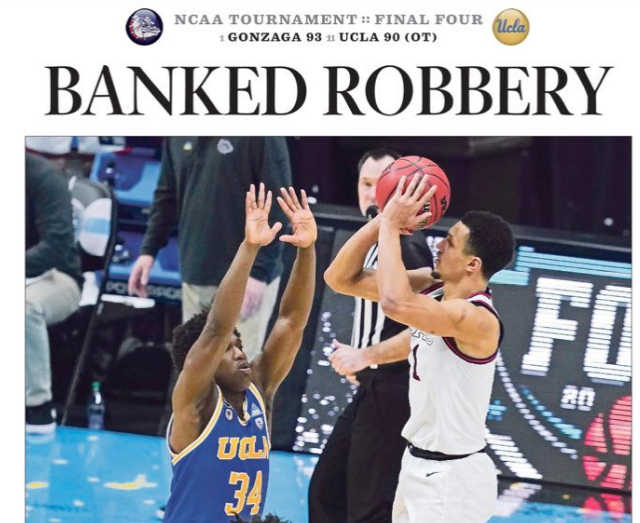 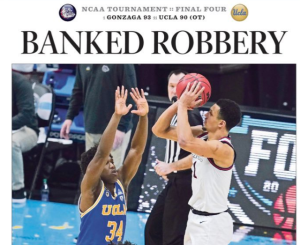 When Jalen Suggs hit his game-winning Bank shot at the buzzer, the score was tied at 90:

Gonzaga University belongs to the Society of Jesus. The game-winning shot was hit by Jalen Suggs.

Gonzaga gets its name from Saint Aloysius de Gonzaga, whose birthday had a Life Lesson number of 43:

Gonzaga’s head coach is Mark Few. His team’s run to the title game occurs as governments attempt to implement vaccine passports across the globe, humanity’s introduction to the Mark of the Beast.

April 3rd is written 3/4 in most parts of the world.

Notice how number #34 went up to block the shot from Jalen Suggs, who wears #1. His Winner banked off the glass at the buzzer:

The headline BANKED ROBBERY from the LA Times reminded me of the North Hollywood shootout just outside of LA, which was the result of a bank robbery. The anniversary of that incident was 34 days before last night’s game:

With a win on Monday night, Few would lead the Bulldogs to the first undefeated season in nearly five decades. The last team to do it was Indiana – this entire tournament is being played in the state of Indiana.

It’s been 34 years since the release of Hoosiers, which is about a basketball team in Indiana.

The game was played 3 weeks, 4 days after Saint Gonzaga’s date of birth and 340 days before his next:

Jalen Suggs was born on the 154th day of the year. This is the Reverse gematria of the number 93:

Intriguingly, Saint Gonzaga died while taking care of patients during an epidemic. This is the first NCAA basketball tournament since the Coronavirus pandemic.

Saint Aloysius de Gonzaga was born on March 9th, which can be written as 9/3.

Jalen Suggs‘ Banked three gave Gonzaga a total of 93 points for the win on the 93rd day of the year:

93 is a number associated with Christianity.

Crucifix yields a 48 in Reduction. Recall how there was a big crucifixion riddle in Gonzaga’s last game before this one. Last night’s Final Four game was played on a date with Primary numerology of 48. This was the same day that rapper DMX, or Earl Simmons, was hospitalized for an overdose.

Six six six has this value in Reduction as well. This is relevant given the sum of Jalen in Jewish/Latin, which reminds us of Gonzaga Bulldogs in the same method.

Jesus was crucified at age 33. Notice how Gonzaga’s final possession began with 3.3 on the clock.

I couldn’t get this number to stop showing up.