Something smells really fishy about Kurt Angle’s gold medal victory at the 1996 Olympics. Not only did he allegedly accomplish the feat with a broken neck, but his win in the finals against Iranian Abbas Jadidi came with some controversy – Jadidi clearly thought he won, enough so that he tried raising his own hand at the end. Instead, Angle was claimed the victor on the basis of being the last man to score a point.

Almost every major success story in sports seems to have a tragedy associated with it. Consider how just six months before his gold medal victory, the man who started to train Angle for the Olympics, Dave Schultz, a former gold medal winner himself, is said to have been murdered by a millionaire sponsor.

The name Dave Schultz has matching gematria with Gold medal.

The number 187 is infamous as the homicide code: 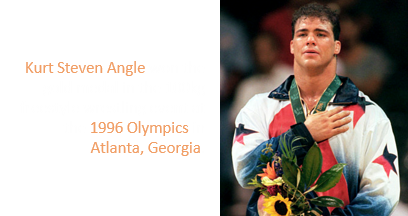 David Schultz was born in the year ’59.

1996 Olympics has matching 131 gematria with its host, Atlanta Georgia, a number of Olympic Gold.

On the date he won the Gold Medal, Angle was 10,096 days old, when his coach Dave Schultz would have been 55 days after his birthday:

Schultz had died at the age of Thirty-six. His murderer’s birthday fell 196 days before his own.

Kurt Angle has always resided in Pittsburgh, PA. Schultz, Angle’s Wrestling coach, was born on the 157th day of the year:

Last year, I made this post explaining why Pennsylvania, Kurt Angle’s home state, is the land of 666. The Earth’s axis is tilted 66.6° to the plane of the Sun, meaning its axial tilt is 23.4°.

His murderer, du Pont, had his first marriage to Gale Wenk annulled after 90 days. He also had Primary birth numerology of 90:

666 is the 36th Triangular number. Schultz’s 36th and final birthday had Primary numerologies of 36 and 126:

Kurt Angle was born on December 9th, or 12/9 in Mt. Lebanon Township, Pennsylvania:

Worth noting he died exactly 24 years before Lakers star Kobe Bryant, who was known for wearing #24, on a date with Tiny numerology of 24, in the year ’96:

Angle would go on to win his first WWE Championship a span of 220 weeks, 5 days after he won the 1996 Gold medal: