The primary owner of World Wrestling Entertainment, Vince McMahon, has been jokingly referred to as “Satan himself”. He’s also been called that in not-so-joking terms:

McMahon even revealed himself as the “higher power” one night: 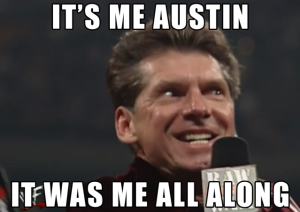 The number of the Beast is often considered to truly be 616. This is the number 919 flipped upside-down.

McMahon’s middle name of Kennedy reminds us of JFK.

On the day after JFK was assassinated, Vince McMahon was 6666 days old:

In English gematria, Vince McMahon sums to 669, which is one flipped digit away from 666. The Reduced value of 57 matches Six sixty-six.

McMahon’s date of birth had Reduced numerology of 33:

The names Vincent and Kennedy both sum to 33.

Thirty-three is connected to 666 in both Reduction and Ordinal gematria.

Now to the entire point of this post – someone mentioned this to me the other day and asked if there was anything strange about it. I always assumed that the ending of the 2005 Royal Rumble was a series of botches that resulted in one of the most memorable results ever. Although I was no longer a wrestling fan at that point, I still ended up hearing about it from several people.

Wrestling is obviously scripted, and fans know this, but the ending here still left many questions. Were they both supposed to fall out of the ring? If so, how was it timed so perfectly? And why the hell was Vince sitting in the ring?

With the secrets of pro wrestling almost completely aired to the public by the 1990’s, the magic of what made the business so special was lost. In order to keep the audience captivated and intrigued, they had to take it a step or two further to keep bending reality.

The “official” story of the men involved is that Batista was supposed to throw Cena over the top rope, resulting in a victory. But he made a mistake, causing both he and Cena to flop on the floor simultaneously. Enraged at the botched ending to a major pay-per-view, Vince McMahon stormed out from the back and slid into the ring, somehow tearing both his quadriceps in the process.

Befuddled, the crowd watched on as Vince eventually determined the match would re-start with just those two competitors still in the ring. After exchanging a couple of moves, Batista threw Cena out and claimed victory as had been scripted all along.

This seems to be the accepted story – but is it really the truth? Both John Cena and Dave Batista are now made Hollywood actors, so going in on a secret to create a special, albeit well-rehearsed moment, doesn’t seem all that far-fetched. Let’s see if there’s a simple riddle to uncover.

Batista was born on the 18th day of the year:

In the most bizarre of all twists, Vince McMahon allegedly suffered two torn quadriceps on his entry into the ring (it’s said he was somehow able to walk off under his own power).

Earlier this week, I made a post showing how 113 was coded into a fake news story (as I commonly do). This number is often combined with 713 or 317, as I showed last week. Those numbers are a lot like The word LIE flipped upside-down.

This is also similar to the value of the winner’s ring name, Dave Batista:

Quadricep and Quadriceps both sum to 50, which may be connected to the year ‘05.

The birthdays of Batista and Cena are separated by 95 days:

My verdict? It had to have been staged. There are a couple of tells when watching the video too. Notice how the camera cuts to McMahon marching to the ring before he even completely emerges from backstage. If this was an unscripted moment, it would have taken several seconds to notice he was there, much less decide to show him.

One could argue Vince asked the cameras to show him before he left backstage, but how could he be focused on anything other than ending the show properly in that moment? Tearing both quadriceps on his way into the ring is too much of a stretch for me, but what an excellent performance all around.