This news was published on February 12th, or 12/2. This famous Jeopardy! contestant died in Las Vegas, NV.

Brayden’s first appearance on Jeopardy! was a span of 1 month, 22 days (or 7 weeks, 3 days) before he died:

I remember seeing Brayden Smith’s name in the news last month. He was being hailed as “Alex’s last great champion”, having the best run of any contestant to appear in the episodes that featured Trebek after he passed away in November.

Brayden was born on the 250th day of a leap year:

Brayden died on the date leaving 329 days in the year:

His death was announced on the date leaving 322 days in the year:

He died 89 days after Alex Trebek, and a span of 4 weeks, 4 days after his final appearance on Jeopardy!. His death was not announced until yesterday, February 12th, which was 59 days after that date:

The word killing has double gematria of 115. Brayden was from Las Vegas, Nevada. 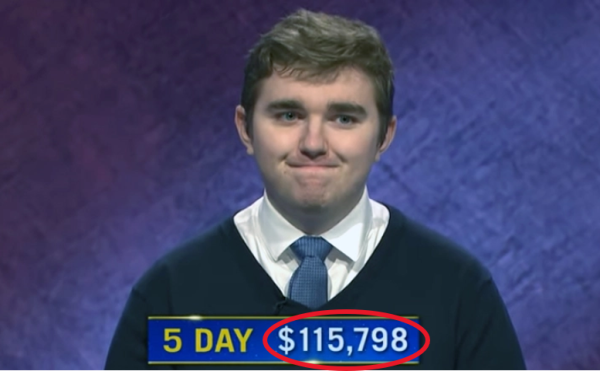 In my second post on the death of Alex Trebek, I pointed out how there was a massive Mercury riddle in his numbers.

Recall how the Las Vegas shooting in 2017 was a Mercury ritual connected to the JFK assassination, which was perhaps the biggest Mercury ritual of all-time.

I don’t really think dates are spelled out this way, so maybe this is a fancy coincidence. Brayden Smith died on February 5.