It’s being reported that Larry King has died on the 23rd day of the year:

In Jewish gematria, King sums to 66, which syncs up with the value of his real last name, Zeiger.

His death from the corona pandemic fell a span of 66 days (or 65 days) after his birthday:

It was on a date with Primary numerology of 65:

In Ordinal, COVID Nineteen sums to 139.

Corona, which sums to 66, is 6 letters long. See my video on how 666 is the primary number coded into the COVID-19 plandemic.

That series’ first episode aired on the 306th day of a leap year:

Larry King Live was his first show on cable television. Notice how his full name and CNN both have that special 1331 gematria:

His final show on CNN was on a date with 13-31 numerology:

Adding the names of his three shows yields an upside-down 666.

Larry King had a third show called Politicking with Larry King. It debuted on 6/13/13, another nod to 666.

When you write out six six six or triple sixes, you get an Ordinal value of 156:

Remember how the man who bought the World Trade Center a span of 1 month 19 days before the 9/11 attacks was named Larry?

666 is a major eclipse number, so of course there is a connection here. Not only is it just over 41 months since the Great American Eclipse, but King also died a span of 41 days after the most recent total solar eclipse: 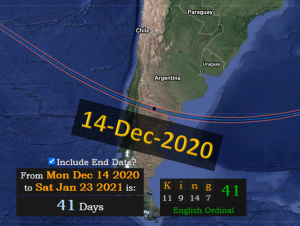 Revelation 6:12 mentions both a solar and lunar eclipse:

Larry King Live on CNN debuted on a date with Primary numerology of 113, which is the primary number of deception: