In 2001 , the original Twin Towers were destroyed
The 2 towers were ultimately replaced by 1

This represented the division of masculine and feminine energies.

The Twin Towers were brought down on 9/11 in a Tisha B’Av ritual. 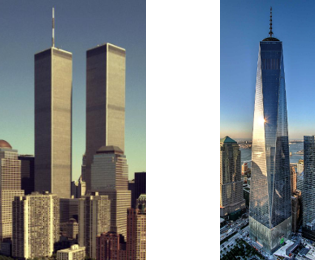 Construction of the original World Trade Center complex began in 1968, 33 years before 2001, when they were brought down.

When he was a she, her full name had matching gematria with New York.

Tisha BA’v is a holiday of mourning, where the destruction of the two temples is observed. World Trade Center has matching gematria with Solomon’s Temple, the first one to be destroyed.

In Hebrew, Solomon’s Temple is called The First Temple, which sums to 1423:

December 1st was 13 days before this year’s total solar eclipse. Male, Solomon, and Androgyne have matching 13 gematria with WTC.

1982 was the year the film E.T. the Extra-Terrestrial was released. That film features an alien in drag talking to Elliott. As bizarre as it sounds,  these stories really do appear to be aligned like this.