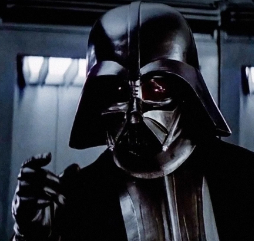 The man behind the Vader mask, whose full name is David Charles Prowse, has died at the age of 85.

Although David Prowse was the actor in the Darth Vader suit, James Earl Jones voiced the character. Prowse died a span of 51 / 50 days before Jones’s birthday:

Prowse died on a date with Primary numerology of 79:

In the Star Wars Universe, Vader dies in Return of the Jedi (this author’s favorite Star Wars film).

Prowse was born on July 1st, making him a Cancer, which is the sign ruled by the Moon. As I commonly point out, 13 is the number of the Moon. He died 13 days after turning 1056 lunar phases old:

Prowse died on the 333rd day of a leap year, the day that leaves 33 days on the calendar:

In the Gospels, the Crucifixion of Jesus occurs in 33 A.D. while darkness falls over the sky, akin to an eclipse.

The word Eclipse sums to 33, as does the last name Prowse.

He died 2270 weeks after the release of the first Star Wars movie. Vader would then die in Return of the Jedi:

David Prowse was 31,197 days old when he died. Most people saw the news the following day, which was 1197 days after the first Great American Eclipse:

This is the gematria of 666, a significant eclipse number.

This is the value of James (Earl) Jones in Sumerian.

David Prowse died 150 days of his birthday, and news of his passing was published 15 days before the eclipse:

News of his death was published on a date with Primary numerology of 44:

Also worth noting that he died 193 days after the anniversary of the release of both The Phantom Menace and Revenge of the Sith, where we are introduced to Anakin Skywalker and Darth Vader, respectively.