The world learned about the passing of Carl Reiner today, June 30th, which falls a span of 103 days after his birthday:

Reiner had formed a comedy duo with fellow funnyman Mel Brooks, whose birth name was Kaminsky.

Reiner passed away on a date with a Life Lesson number of 39:

Reiner’s death fell during the time of Cancer, which is Mel Brooks’s birth sign. Mel had just turned 94 years old the prior day.

Cancer is ruled by The Moon.

Brooks was born exactly 223 weeks after Reiner. This is also 57 sidereal months:

The 57th Prime number is 269. Adding 57+269 sums to 326.
The Exaltation for Cancer is Jupiter, which is Reiner’s ruling planet (Pisces). Mel Brooks was 326 days before turning eight Jovian years old on the date of Reiner’s death.

Carl’s exit from our planet appears to be related to the two Great American Eclipses.

There are 1440 minutes in a day. “Time” = 144 (Jewish).
Reiner was born with his Moon in Sagittarius, which is the only other sign of the Zodiac whose ruler is Jupiter.

45 and 197 are significant numbers to The Moon and its Metonic cycle.

Reiner was probably best-known for writing and producing The Dick Van Dyke Show. Van Dyke is a Sagittarius.

Sagittarius is of particular interest here in 2020. On December 21st, there will be a Great Conjunction at 300°, the cusp of Sagittarius (sidereal), while the Sun will be at 270°, the other side of Sagittarius, essentially framing it in the sky: 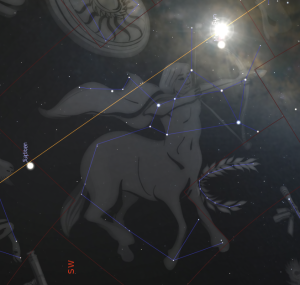 Carl Reiner was born a little more than six months after a Great Conjunction. They typically only occur approximately once every 20 years.

Comedians in Cars Getting Coffee

The Moon was situated at 269° (Sagittarius) at the beginning of the date Carl Reiner was born. That’s the 57th Prime number, a significant Moon number as mentioned above. The Moon ranges 57 degrees around the Tropics.

The Moon entered Sagittarius on the date the episode first aired. Recall how “Sagittarius” = 144 (Ordinal). Jerry Seinfeld was 144 days after his birthday on that date:

The first 144 digits after the decimal in pi sum to 666. You may recall from this post that 666 lunar phases is 2.83 Metonic cycles. The Metonic cycle is 19 years long – making it pretty interesting that Reiner’s and Brooks’s appearance was on Season 1, Episode 9. They visited Norm’s Diner.