A man who hiked the ball for a living, dies while out on a hike?

Max Tuerk played center for the USC Trojans in college. He would end up getting drafted into the NFL in 2016, but played only one snap during his career back on Christmas Eve in 2017.

Max Tuerk wore #75 in college. He died during a hike. 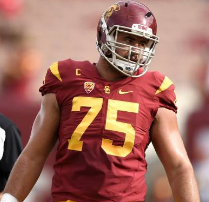 His one NFL snap was played for the Arizona Cardinals.

Tuerk was originally drafted by the San Diego Chargers, who are now called The Los Angeles Chargers.

The word Eclipse sums to 314, the first three digits of Pi.

…but the headline sums to 314 in both Single Reduction and Reverse Reduction with Reduced number calculation:

113 is the 30th Prime number
The date Tuerk died had a Life Lesson number of 30:

38 is a number of death. Max played at USC before being drafted by San Diego, all of which sum to 38 like killing.

The 38th Prime number is 163
He died in a forest named after President Grover Cleveland.

It happened on the 172nd day of a leap year:

The 2024 eclipse falls on the date 4/8, similar to the gematria of San Diego Chargers.

June 20th can be written 20/6. His death at age 26 fell 20 weeks, 6 days after Kobe Bryant, who played his career in southern California, is said to have died in a helicopter crash.

News of his death broke on the first day of Lunation #1,206.

After playing for the USC Trojans, Max Tuerk was with the Chargers during their move to LA, which sums to 13.

After a four-game suspension, he was signed by the Arizona Cardinals, whose A.C. initials are 1-3.

The date of his lone NFL appearance fell on a date with 73 and 46 numerology:

Worth noting that he was released by the “Cardinals” = 81 a span of 801 days before his death.

In Reverse, thirty-three sums to 141.

It’s being reported that he died on a hike with his family in Cleveland National Forest, which is on the 33.3rd parallel in California.

The nearest city to the forest is Corona.

He passed away on a date with 66 numerology:

Tuerk was born 156 years after Grover Cleveland.
His birth on 1/27 also fell 1027 months after Cleveland died.
Grover was born on 18/3 and would currently be 183 years old.

Max Tuerk was born during the time of Aquarius, which is ruled by Saturn. In Hebrew, Saturn sums to 713. This is the Satanic value of the team who drafted him.

He was drafted on a date with 69 and 42 numerology:

The detriment for Aquarius is the Sun, which may or may not be significant in relation to dying by eclipse numbers.