Donald Trump sums to 589 in Jewish, which matches the Hebrew value for The Golden Gate.

The temples are called Solomon’s Temple and the Second Temple, also known as Herod’s Temple. Eventually, they hope a Third Temple is built.

Trump became the first president to visit the site of Solomon’s Temple in May of 2017. The eastern gate of the Temple Mount is called the Golden Gate. Trump visited the Western Wall. 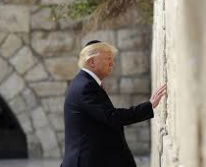 The 9/11 attacks were carried out by airplanes. Rambo has done a wonderful job piecing the puzzle together in regards to why modes of transportation are so prevalent in major ritualistic deaths.

Trump was born in New York City. The only two times an airplane struck a skyscraper in NYC prior to 9/11 both occurred less than one year before he was born. See this post for a killer breakdown of how they were both connected to 9/11 and the birth of Donald Trump. One of the buildings struck is even currently owned by Trump.

The current airplane model serving as Air Force One is the Boeing VC-25.

The plane was introduced in 1990 on the date on August 23rd, written 8/23. That’s right at the beginning of Virgo, which is ruled by Mercury, the god of transportation. Trump is a Gemini (just like his “twin” Boris Johnson), which is the other sign ruled by Mercury. His VP Mike Pence is another Gemini.

That introduction date falls 10,895 days (or 29 years, 303 days) before June 20th, the date I’ve been excessively talking about for over a week:

Trump is President #45. I recently discovered a potentially-significant eclipse cycle that lasts 405 lunar phases. That post even talks about a plane crash on the 405 from 2017 that appears to be related to June 20th.

The name Caroline Kennedy has gematria of 250, to go along with the big 25 riddle linked above.

The original Air Force One, which Lyndon B. Johnson (a Virgo) was sworn in on, had its first flight in the year 1962. The date of that flight was August 10th, the same date Caroline Kennedy was elected in 2017.

The election was on a date with Primary numerology of 55:

Nikki Haley served as Trump’s first Ambassador to the United Nations until the end of 2018. After she left the position, she too became a member of Boeing’s board of directors.

She was selected as a board member on April 29th, the 119th day of the year:

Notice her last date on the job – March 19th, or 3/19, matching the last number mentioned in the Caroline Kennedy section. March 19th was also 55 weeks after her nomination.

To me, the plane crash theory doesn’t really work. How does the most carefully-monitored aircraft in the world go down? With thousands upon thousands of flights every day in the U.S. with no commercial crashes for almost 19 years, it seems completely unbelievable that Air Force One would be the one to go down due to some sort of error.

Being shot down doesn’t make much sense either. How could enemy aircraft get anywhere near the plane? Should we believe that some random citizen on the ground has an anti-aircraft RPG?

I’d really be surprised if this is what they go with (assuming they go with anything at all). Its just interesting to see how many things point to June 20th so cleanly.