The date June 20 seems to be very significant in 2020. This post will explore how this date’s numerology is especially significant to our current president, Donald Trump, and whether or not it could be an ideal assassination date. Not only does human sacrifice sum to 620, but the Greek word for sacrifice has this value as well.

Of course, I believe that a presidential assassination would be a staged, fake event, so in no way should anything in this post be construed as encouragement for anyone to try doing so. You’d be an idiot. I am not condoning violence against anyone.

For years, I’ve claimed that a Trump assassination would be too big of an event to pull off and would wake too many people up. However, after the public has revealed its pitifully-low levels of intelligence and awareness following the Covid-19 pandemic, I no longer believe this. The masses are still willing to believe almost anything from the television.

The reason I decided to make this post is because I successfully predicted that 2020 would be the year of the next life-changing event, and that it would occur in Seattle. On January 21st, 2020, someone in a suburb of Seattle became the first confirmed case of Covid-19. Our lives have not been the same ever since.

Donald John Trump was born on the same date as a total lunar eclipse. 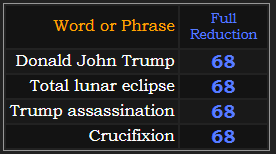 Logically, the Moon landing was a ritual heavily-connected to total lunar eclipses.

Every 54 weeks, the Sun passes Saturn in the sky. This number was coded into the Grenfell Tower fire, which occurred on Trump’s birthday. June 20th, 2020 falls 50 weeks, 4 days after the most recent total solar eclipse and 5 years, 4 days after he announced his campaign:

In English gematria, Saturn sums to 741.

See why November 30th is a particularly-significant date by reading this post.

Kobe Bryant was born on the date leaving 130 days in the year:

Trump’s birthday is 14/6, which is the Reverse gematria of Jesus Christ.

America is currently 243 years old. Venus has a rotational period of 243 days.

Kobe’s death is what led me to accurately predict the outcome of the Super Bowl. In the linked video, I said Patrick Mahomes would lead the Chiefs to a 4th quarter comeback over the 49ers and Jimmy Garoppolo, the Venusian quarterback.

On June 21st, the summer solstice, there will be an annular solar eclipse. This is exactly 19 years after the total solar eclipse of 2001, which directly preceded the September 11th attacks by 19 hijackers.

JFK was allegedly killed from a bullet fired from the Texas School Book Depository, whose address is 411 Elm St. 411 Elm St. was even mentioned in an episode of Andy Griffith that aired on Christmas almost two years before the assassination.

The last president to be assassinated while in office was John F. Kennedy, who won the 44th presidential election. Trump is the 44th man to be U.S. president. 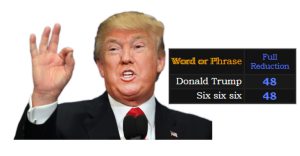 Not only does Donald sum to 119, but his full name’s Ordinal gematria matches World Trade Center in Ordinal. Consider how Covid-19 was declared a pandemic exactly 18.5 years after 9/11.

Trump announced his candidacy from his 58-story Trump Tower, then won the 58th presidential election, which was held 58 years after ’58. He hired 58-year-old Steve Ray to conduct the inaguration ceremonies on a date with Primary numerology of 58:

Trump visited the Western Wall on May 22nd, written 5/22.

Western astrology is not very representative of the Sun’s real position in the sky anymore. On June 21st, or 21/6, the Sun actually passes through the Taurus-Gemini cusp.

Mike Pence would be the 45th man to become president of the United States.

He would be President #46. June 20th has Standard numerology of 46:

Minneapolis is home to the 612 area code:

See my post on the incredibly ritualistic numerology of August 11th. It appears as if this could have been a clue pointing at June 20th, 2020. As mentioned in the post, San Francisco was 4545 weeks old when the Golden Gate Bridge was inaugurated.

In Jewish gematria, Golden Gate has the same value as June twenty.

The date August 11th is written 8/11, or 11/8. The other date that can be written in these ways is November 8th, which is the date of the 2016 election. From that date to June 20th provides some more pretty interesting numbers: