George Floyd moved to Minnesota just a few years ago. He was originally from the city of Houston, Texas, where he befriended former NBA star Stephen Jackson, who called Floyd his twin. 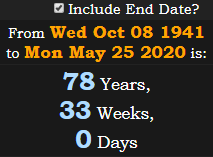 Jesse Jackson was born on a date with 78 and 33 numerology:

The man who killed Floyd was named Chauvin (think chauvinistic). The incident that occurred at a deli was filmed by Darnella Frazier.

Floyd was born on the date leaving 78 days in the year:

Floyd’s death fell 70 months, 8 days after the death of Eric Garner, who was another black man choked out by police while saying “I can’t breathe”:

The name Jackson has overlap with Floyd.