Just several days after my incredibly synchronicity with the death of the Double Rainbow Guy, Google posts a Google Doodle of legendary Hawaiian artist Israel Kamakawiwoʻole, whose most famous song is called Somewhere Over the Rainbow. 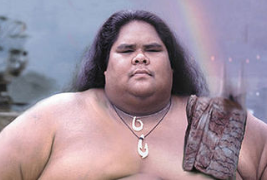 Israel Kamakawiwo’ole is one of the most popular ukulele players of all time.

In order to see a rainbow, it must be reflected at 42 degrees:

The Google Doodle was posted on his birthday, May 20th, written internationally as 20/5.

The people of Israel believe their land was given to them by God.

Israel would have turned 61 years old on the date of the Google Doodle.

Kamakawiwo’ole is known as the Voice of Hawaii. When you flip the alphabet backwards, this sums to 225:

If you flip the calendar backwards, May 20th would be the 225th day of the year:

Israel was also known as Bruddah Iz. He gained worldwide fame upon the release of his album Facing Future, released in ’93.

The Sun is said to be 93 million miles away. The Black Sun is Saturn, which represents the Hebrew (Israel) God El.

As I often state, including in a post that I just made earlier today, 13 and 33 are numbers of sacrifice.

38 is also very significant in death.