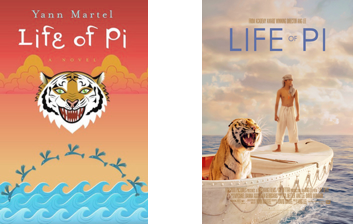 The book Life of Pi was published on September 11th, 2001, the date of the largest occult ritual in modern history. A movie adaptation was then made a decade later, achieving national release exactly one month before the Mayan Calendar allegedly ended.

There’s a wide range of significant numerology with the Life of Pi franchise. I urge you to check out my decode on the death of Irrfan Khan, one of the actors who played “Pi” Patel, from just last month. There’s even more in my video.

The first five digits of Pi are 3.1415. There is a span of exactly 314 months, 15 days between the birthdays of the two actors who played Pi:

The director of the film version was Ang Lee.

Lee was 323 days after his birthday when the book was published, and was a span of exactly 3023 weeks old when the movie debuted at the New York Film Festival.

The 227 / 722 gematria is particularly-significant. In the story, Pi and his tiger survive for 227 days:

In the alphabetic order, twenty-two divided by seven sums to 314.

Let’s flip the equation around and see what the quotient is.

The film adaptation of Life of Pi was released on November 21st, written internationally as 21/11.

The two actors who played Piscine Molitor “Pi” Patel even have combined gematria of 1121.

This story invoking the mathematics of the circle starring Irrfan Khan & Suraj Sharma is about a shipwreck.

130 is the Ordinal gematria of Pi’s pet tiger, Richard Parker.

In the novel, the paperwork gets mixed up, causing the hunter Richard Parker to be listed as Thirsty – None Given.

The shipwreck occurs while Pi is 16 years old:

In Jewish gematria, Pi sums to 69 like circles in English.

The film is said to have grossed a total of $609 million:

In Ordinal, circle sums to 50, which is both the Jewish and Satanic value of the letter O (a circle):