I spent most of my morning doing some spring cleaning around the house. When I decided to take a break, I sat down at my computer to find a message from Bobby alerting me to the death of Little Richard. I took a glance at his name and age and already saw what I’ll be posting about today.

Just as I got up from the computer, I received a text from my friend Jason mentioning the same person. Before I show the conversation, consider how today’s date is May 9th, written 5/9. This text from Jason came the same morning I read about Roy Horn, the man who was attacked by a tiger on his 59th birthday, dying from Covid-19.

Jason’s next birthday is in 159 days:

Jason’s numerology lines up incredibly-well with the Metonic cycle. I was actually a little spooked the first time I ran his numbers.

Over the course of the Metonic cycle, each year consists of either 13 or 12 lunar phases.

The Metonic cycle is credited to an astronomer named Meton.

127 is the Ordinal value of Metonic cycle and Jason McNeill.

The Metonic cycle is nineteen years long. Jason’s birthday has numerology of 109 and 19:

This brings us to the message he sent me just a little bit ago: 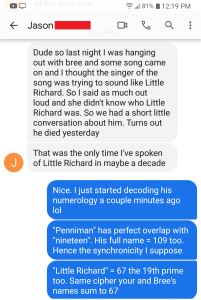 It’s not very often he sends me something like this, but he’s probably the most woke to this out of anyone I know in regular life. What are the odds that he would have this synchronicity with Little Richard, whose name also sums to 67?

Little Richard had Primary birth numerology of 68, like the Reverse value of Meton:

What’s so incredible is how this has all happened just two days after I made this video called Matrix Queries & Covid Theories that explored my seemingly over-the-top organic synchronicities just since Monday alone.

Penniman even has perfect overlap with nineteen.

Although Little Richard did not die from Covid-19, Roy Horn did (allegedly). 666 has been the number coded all over the coronavirus from top to bottom.

I don’t know if I’ll do another post on Little Richard later. The matrix has been firing on all cylinders for me this week, and it seems like others have been experiencing similar things as well.

Ever since I got into this study, it’s always felt like there’s more and more synchronicity each week. A lot can be said for simply being tuned to and aware of what’s happening around us. But there is definitely something different about this past week. Something big is happening, and hopefully things are changing for the better. I just know that amidst this draconian fear matrix that’s currently enveloping the world, I can still see things like this happening and be reminded that something much greater than us is still at work, and we were always meant to have been taken on this ride.