May 5th had Primary numerology of 50:

Kiing Shooter is said to have died of corona.

He was signed to Mass Appeal Records, owned by fellow rapper Nas.

Kiing Shooter’s first release, “They Say”, dropped before his EP. This song came out on a date with numerology of 73 and 46:

227 is a highly-significant number that is central to this code. 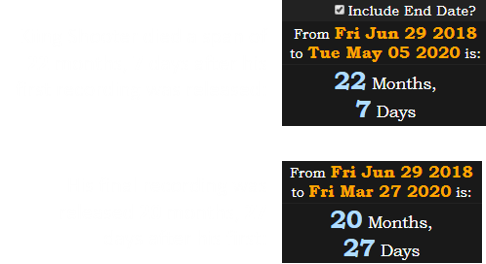 His full name combined  with his stage name sums to 409. So does the full name of his first EP. These both also sum to 131 like crucifixion.

The Crucifixion of Jesus Christ is often believed to have occurred in 33 A.D. when Jesus was 33 years old.

Worth noting that without the extra I, King Shooter has the same gematria as thirty-three.

His death fell 141 weeks after the first Great American Eclipse.