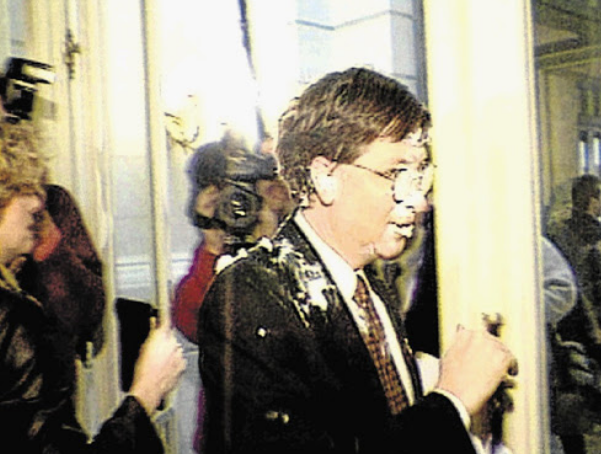 On February 4th, 1998, somebody threw a cream pie into the face of the chairman of Microsoft, Bill Gates.

On the date of the incident, Gates was 2205 weeks old:

The man who threw the pie in his face turned out to be named Noel Godin.

When surrendering to the authorities, he was quoted as saying “my work here is done.“

The headline I wrote for this Blog post just happens to be 240 in the alphabetic order:

I wonder if this is really a coincidence. The date the pie was thrown was February 4th, written as 2/4 in the United States, but 4/2 in most parts of the world. Bill Gates was 42 years old:

February 4th is the 35th day of the year:

The date had a Life Lesson number of 33, and February 4th leaves 330 days in the year. The perpetrator is from Belgium:

Notice how the date also had Primary numerology of 123, lining up with Gates’s full name:

Quite often, I discuss “Pi” riddles on my blog. Receiving a pie in the face must have an underlying riddle, no?

3.14 are the first three digits of Pi. Notice how three point one four matches Noel Godin in gematria.

Pi of course resolves the mathematics of the circle. Microsoft was founded on 4/4, a date with numerology of 83

Bill Gates was 42 years, 99 days old when the pie was thrown:

In the alphabetic order, circle sums to 50, like how the circle, O, is worth 50 in Latin/Jewish gematria:

This matches the Reduction value of the man who threw the pie. He was a Belgian.

The circle is the mark of the Beast, as I’ve been teaching for several years.

The pie incident occurred in the year 1998.

Gates has the same gematria as Devil.

Microsoft was founded on April fourth, which is written 4/4 like the number forty-four.

Pie-thrower Noel Godin was 144 days after his birthday:

Microsoft was in the first day of its 275th month since its founding: