This story was published on the 82nd day of a leap year:

Today has Primary numerology of 65

The first in-person meeting between Donald Trump and Kim Jong Un was in Singapore on June 12th, 2018, which was a span of exactly 650 days ago:

Both coronavirus and pandemic sum to 65.

News about Trump and Kim Jong Un has always been coded by the numbers of Freemasonry. See these examples:

This story was published a span of 1 year, 9 months, 11 days after Trump and Kim’s first meeting in Singapore: 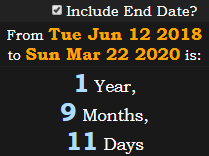 Both Donald Trump and Kim Jong Un have 48 gematria in Reduction.

Donald Trump is 2 months, 23 days before his birthday:

13 is another significant number to Masonry. Kim Jong Un is currently 13,223 days old:

The number thirteen is the only one to sum to 99 in the alphabetic order.

Trump is a span of 9 months, 9 days after his birthday, and Kim Jong Un has been Supreme Leader for 99 months:

Coronavirus was declared a national emergency on the date Trump turned a span of exactly 885 months old: