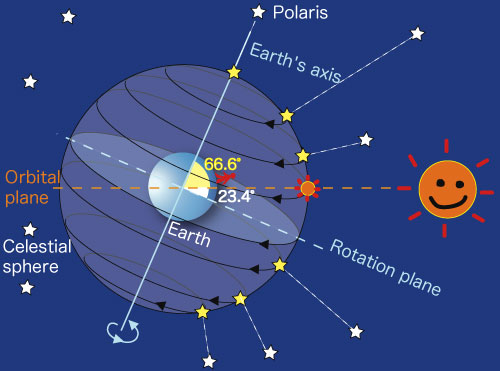 The Earth’s axis has a 66.6° tilt from its orbital plane to the Sun. Only when the Sun & Moon are both along this plane do we get an eclipse.

Carbon, the basis of human life, is made up of 6 protons, 6 electrons, and 6 neutrons.

2160 is MMCLX in Roman Numerals

The Moon’s average distance from the earth is approximately 238,000 miles:

This is numerically similar to the gematria of both 666 both with and without the word and.

The mathematics of the circle truly is mathematical perfection.

When the Geometry of the Sun lines up each month, we get a Full Moon.

Every solar or lunar eclipse is either 1, 5, or 6 lunar phases after the most recent eclipse.

The Moon must cross the Plane of the Sun

In English, 156 is the gematria of both Six six six and Triple sixes.

It’s also the Ordinal value of Thirty-three, which is the Reduction value of eclipse:

With very rare exception, every single eclipse will be followed by another one exactly 223 lunar phases later. This cycle is called the Saros cycle. In Hebrew gematria, The Moon sums to 223

223 is the first number to sum to 314 in the alphabetic order, like pi. The smallest equation to get these first three digits of pi is 22÷7 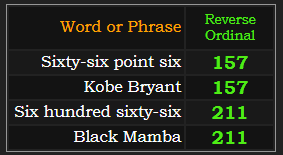 Kobe played his entire career for the Lakers, whose colors are Purple & Gold

In his 666th career game, he scored 81 points in the second-best individual scoring effort in league history.

666 is revealed as the number of the Beast in the 66th and final book of the Bible. After Kobe Bryant started 1197 regular season games during his career, his next and final career game was the 66th of the season, and he scored 60 points.

Kobe died at the age of 497 months, 3 days in a helicopter

The first game the Lakers played after Kobe Bryant died was on January 31st, the date written 31/1. It was against the Portland Trailblazers, who entered the game with a record of 21-27

The Lakers entered (and left) that game with 36 wins.

The owner of the Lakers when Kobe was drafted was Jerry Buss, who would have been a span of 87 years old on the date Kobe died:

Kobe Bryant was drafted in ’96, the inverse of which is 69, an eclipse number. The name Kobe Bryant and Kobe have immense overlap with total solar eclipse

L.A. Lakers has 137 and 227 overlap with the English and Hebrew values of Total eclipse

Recall the Moon’s average distance of 238,000 miles from the Earth.