Robert Archibald died on January 23rd, the date written 23/1. 231 is the 21st Triangular number – he wore #21 throughout the vast majority of his NBA career.

This death is extremely interesting. Archibald is the only Scotsman to have ever played in the NBA, according to the linked article.

When decoding the death of a Scotsman, it’s important to look at the numerology of Masonry, as the primary Rite of Masonry is the Scottish Rite.

Robert Michael Archibald died at the age of 39. Deaths / sacrifices are in accordance with the eclipse crucifixion code.

Robert Michael Archibald sums to 1313. Notice how both his full and common names have overlap with Masonry in the large ciphers.

Scottish Rite has gematria of 159 and 644, both of which are found in the mathematical ciphers for Archibald

In Reverse Reduction, Archibald sums to 59

In Hebrew, Freemasonry sums to 59 in Reduction. This is the same number you get in English:

Archibald was born on the date leaving 277 days in the year:

In Jewish gematria, his name sums to 445. This is the Hebrew gematria of total lunar eclipse

The phrase ritual sacrifice sums to 73, just like sacrifice in Ordinal.

If we instead measure to the next total lunar eclipse, we find he died a span of exactly 70 weeks before it:

This is the Reverse Reduction value of total eclipse, which has remarkable overlap with Archibald’s full name:

Notice how the linked article put the words “sadness” and “shock” in quotes. This is actually a nod to this part of the riddle.

He was drafted 32nd overall out of college.

Archibald had birth numerology of both 32 and 131

The date he died had numerology of 44 and 64

He played a total of 44 games in his career: 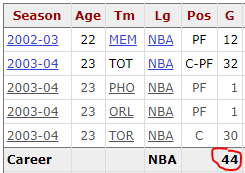 I just did a post on the career-ending injury of Chandler Parsons, who played a total of 440 games in his career up until his car accident.