This death occurred the same day Nationals pitcher Fausto Segura died in a motorcycle crash in the Dominican Republic. 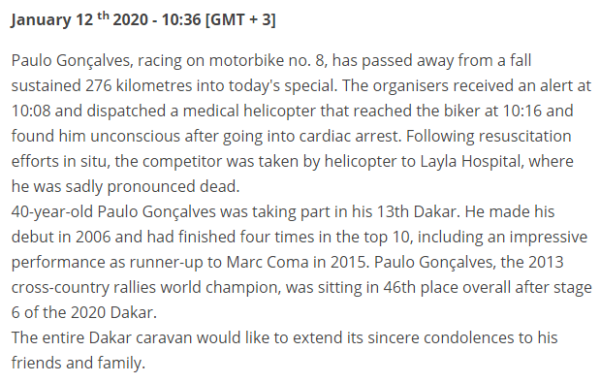 His death fell 11 months, 7 days after his birthday:

The Portuguse Motorcyclist was the ’13 cross-country rallies world champion. Notice this was his 13th Dakar Rally

The death of this Rally biker made the news on January 13th, the date written 1/13

He was sitting in 46th place after the first six stages of the race.

The name Paulo sums to 65

As mentioned up top, he died the same day as Fausto Segura, who also died in a motorcycle crash. Adding their names together gives us 313 Ordinal.

Notice how he was born on February 5th, which can be written either 2/5 or 5/2