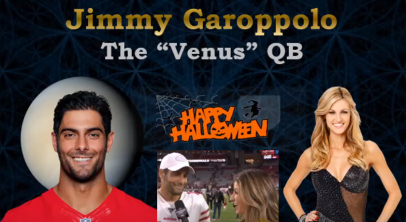 In early November, I made this video about the “Venus” quarterback, Jimmy Garoppolo. You can see the blog post at this link.

In the video, I discuss how good friend of the Gematrinator, Bobby Simpson, created this video a week before Garoppolo’s game on Halloween. In the video, he predicted that the 49ers’ quarterback would be the topic of some sort of Venus tribute based on his numerology. Sure enough, the biggest news story the next day was about Garoppolo’s flirting with Erin Andrews, whose numerology lined up incredibly well with Venus.

Bobby had off of work today, so we wound up chatting over Discord for about an hour, certainly the longest chat we’ve had. Being the mystic that he is, Bobby checked his age as of today’s chat and found a pretty significant number:

During our conversation, we spent a fair amount of time discussing Jimmy Garoppolo and his other various connections. As it turns out, Garoppolo was in the news today for being fined by the NFL. Check out the oddly-specific amount they fined him:

As of today’s news, Garoppolo is a span of 67 days after his birthday:

The game was played in Seattle at CenturyLink Field

Pinelli was wearing a George Kittle jersey. Kittle was born on 10/9

He caught the pass from Jimmy Garoppolo, whose nickname is Jimmy G