I came across a video on this problem yesterday. Cliff had a post on the Josephus Problem on his old blog, but with that page no longer active, I thought it would be fitting to expand on his work.

The Josephus Problem is a fun little mathematical exercise, but this post will be instead exploring the numerology and gematria of the story surrounding the problem, which originates from a story about Jewish soldiers. Historically, gematria has been a predominantly Jewish practice. A big clue is given in the Wikipedia page when they mention the year 1612, which is the Jewish gematria of the word Jewish

In the Jewish Talmud, Baba Kamma 113a says it’s okay to circumvent a non-Jew with subterfuges (lies). A significant amount of words having to do with dishonesty sum to 113. 113 – liE

To illustrate that both English and Jewish/Latin gematria are significant to this riddle, notice how Josephus sums to 113 in one cipher and 1103 in the other:

The Josephus Problem is about forty-one Jewish soldiers

The Josephus Problem comes to us from the Siege of Yodfat:

Pi resolves the mathematics of the circle. In the Josephus Problem, 41 soldiers are sitting in a circle 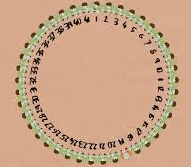 The Josephus Problem has the same gematria as The circle

83 is the 23rd Prime number, syncing up with Flavius Josephus and Jewish soldiers

With 41 soldiers in the circle, the one who ends up being the last to survive would be soldier #19

In Jewish gematria, the word nineteen has the same numeric value as the Hebrew word for kill

There are 19 years in the Moon’s Metonic cycle. The Jewish calendar is lunisolar, observing both Moon phases and revolutions around the Sun. Every 19 years, 7 of them must contain a 13th month.

Both Sun and Moon and Sun & Moon give us 13‘s in gematria: