The jersey, which reads Francis, is number eight 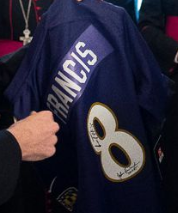 Without the Jr at the end, Jackson has 201 gematria, just like Francis’s real name:

Lamar Jackson turns 33 in the year 2030. On today’s date, when most people are seeing this story, he’s 33 days before his 23rd birthday:

33 has matching gematria with Baltimore Ravens

When Francis became the Pope, Lamar Jackson was a span of 16 years, 66 days old:

On the date the Pope received his number eight jersey, the Baltimore Ravens were in their 8700th day of operation:

The jersey was given to the Pope a span of 35 days before Jackson’s birthday:

The date had standard numerology of 35

The jersey was presented to the Pope during the Ad Limina visit, in which bishops provide reports about their local dioceses. 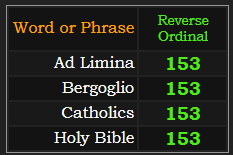 It was Baltimore bishop William E. Lori who handed the Pope the jersey:

Bergoglio has been the Pope for exactly 351 weeks:

The jersey was also signed by coach John Harbaugh, whose date of birth is 9/23, the 266th day of the year: