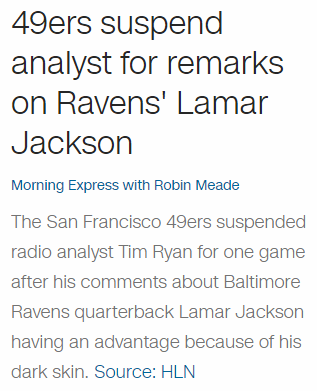 Tim Ryan was 19080 days old when he was suspended:

His suspension was for making remarks about Lamar Jackson’s dark skin.

Ryan was 87 days after his birthday, or 88 with the end date. This syncs up with his full name and the show he made his remarks on:

Ryan was suspended on a date with standard numerology of 35

Ryan broadcasts for the San Francisco 49ers, who were exactly 3835 weeks old:

Lamar Jackson was a span of 35 days before his birthday, which went along with the numeric ritual involving the Pope receiving a signed jersey of his: