Romney was born on March 12th, which is the 72nd day in leap years: 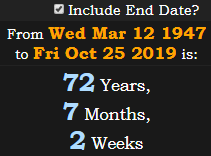 Today is 72 days before the new year:

Republican Mitt Romney has been a vocal critic of Republican Donald Trump. Just this past week, Romney ripped his strategy on Syria.

Mitt Romney is a span of 272 days younger than Donald Trump: