The grand slam was hit by Howie Kendrick, whose full name sums to 244 in both English and Jewish gematria:

In Reverse, nineteen sums to 130

The Nationals came back from a 1-3 deficit in the 8th inning.

He was 89 days after his birthday:

Kendrick’s middle name is Joseph. The hit came off a pitcher named Joseph.

Kendrick’s grand slam made the game 7-3, which turned out to be the final in their win over the Los Angeles Dodgers

Kendrick’s most recent birthday was his 36th

36 is the gematria of Dodgers in both Reduction methods:

Notice the 72 in Ordinal.

Kendrick made his Major League debut in the city of Los Angeles in 2006, playing for the Angels. That was exactly 702 weeks before the game:

Howie Kendrick even used to play for the Los Angeles Dodgers. Even though it’s been nearly 3 full years since the Dodgers traded him away, his Wikipedia page still shows him in a Dodgers hat: 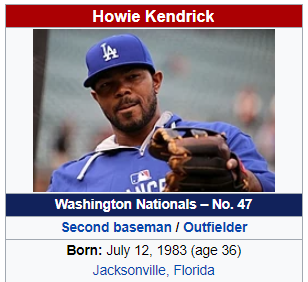 Kendrick was first traded to the Dodgers in 2014, a span of exactly 58 months before his grand slam that eliminated them from the playoffs: 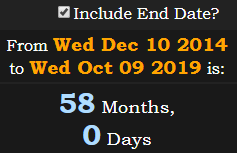 The grand slam fell on a date with 58 numerology:

Howie Kendrick went from the Dodgers to the Phillies, who traded him to the Nationals just before the trade deadline in 2017, which was exactly 803 days before last night’s game:

Kendrick was born in ’83

It’s appropriate that Kendrick played for the Philadelphia Phillies. Phi is the Golden Ratio, or 1.61

Kendrick’s grand slam last night came off of relief pitcher Joe Kelly, who was born on the 161st day of a leap year:

Kelly has primary birth numerology of 122

Last night was 122 days after his birthday:

Joe Kelly made his Major League debut just one day after his birthday, meaning October 9th is a span of 122 days later. Without the end date, June 10th to October 9th is 121 days.

The numerology of Joe Kelly, who gave up all four Nationals runs in the 10th inning, also treats us to a nice pi riddle. Check out when he was born: 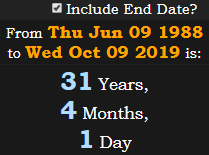 Kelly was born in the year ’88. Last night’s game fell a span of exactly 88 months after his Major League debut: 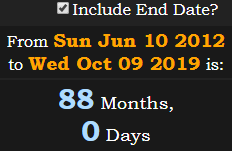 This means his primary birth numerology is 121

Fun fact: Los Angeles Dodgers and Washington Nationals both sum to 278 in Reverse:

The Game 5 loss was Dave Roberts’ 278th loss as Manager of the LA Dodgers.