The Tequila KC bar shooting was a span of 97 days after the 2019 total solar eclipse.

The name of the second suspect is Hugo Villanueva-Morales

As I mentioned in my first post, this happened a span of exactly 91 weeks after Mayor David Alvey took office in January of 2018: 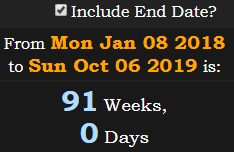 In my original post, I also mentioned how it was related to the numerology of the Governor of Kansas, Laura Kelly, who is the state’s 48 Governor.

CNN has a really strange quirk in today’s article. Notice how they say the shooting began at about 1:30 am CST, but list the EST time as 2:20, which is of course impossible since the times should always be one hour apart.

First, the 1:30 is a nod to the fact that the bar has matching gematria with 13

The first victim mentioned in the article is Francisco Anaya, whose name has almost perfect overlap with human sacrifice

As for the other time showing 2:20 – it was four Hispanic males that died, and two more that are suspected of the shooting:

It happened 250 days after Kansas Day, the date Kansas was admitted to the Union: