A man flew in from Norway to visit his father-in-law as a surprise. Apparently, his plans worked out a little too well – the man was SO surprised, he fired his gun, killing the Norwegian visitor.

This story is a perfect example of the eclipse crucifixion code. Its publish date of 10/4 has matching gematria with total solar eclipse and the name of the victim, Chris Bergan

The murder actually occurred on the night of October 1st, or 10/01. That’s the Jewish value you get when adding the names of the shooter and the victim:

CNN waited until today to post this story, a date with standard numerology of 33

Jesus is believed to have been crucified at age 33

The killing was a span of 30 weeks, 3 days after Florida’s date of admission to the Union, which is 3/3 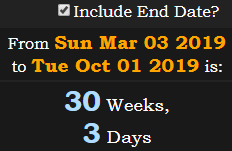 The Catholic Church teaches that Jesus was crucified on the 93rd day of the year, between 9 am and 3 pm. See more on the significance of 93.

Darkness falls over the sky during the crucifixion, an event which is only comparable to a solar eclipse.

When Bergan was killed, it was October 1st in the U.S., but October 2nd in Norway. Both dates are 13 weeks, 1 day after this year’s one and only total solar eclipse:

The riddle continues with Richard Dennis, the name of his father-in-law. We’re told he’s 61 years old

In Ordinal, Jesus sums to 74

The killing was on October 1st, which leaves 91 days in the year:

October 1st was 91 days after the most recent total solar eclipse and 440 days before the next:

That’s why this story involves a surprise

In Reverse, father-in-law sums to 180, which was attributed in CNN’s headline: