In order to resolve the mathematics of the circle, you need Pi, or 3.14 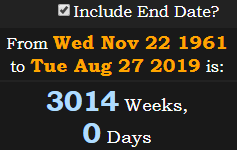 Reshuffle those digits, and you get 143. This is the Hebrew gematria of circle