He is well-known for his work with Koch Industries and Americans for Prosperity. He ran both alongside his brother, Charles de Ganahl Koch, who is currently 83 years old.

The date he died leaves 130 days on the calendar:

Koch died a span of 3 months, 3 weeks after his birthday: 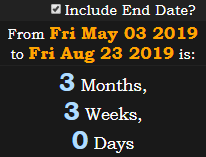 August 23rd had a Life Lesson number of 43

David Koch’s death falls on the 23rd day of the month, a date with 23 numerology: 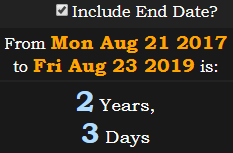 Koch died 479 days before the next total solar eclipse:

The most significant cycle in relation to the Moon appears to be the Metonic cycle, which is a period of 235 lunar phases. Today is the 235th day of the year:

David Koch provided the funding for the political advocacy group Americans for Prosperity, which was founded on March 10th in 2004. That date falls 23 weeks, 5 days before the 235th day of the year:

Consider how we are currently in the year ’19 – the 19th Prime number is 67, which is the Ordinal value of Meton, the Greek astronomer whom the cycle is named after.

Koch Industries was established on the date February 8th, which falls a span of 197 days before the date David died: