In one of the WWE’s more befuddling events in recent history, Universal Champion Seth Rollins and the “Monster Among Men” Braun Strowman teamed up to win the WWE Tag Team Championship. The two men had never teamed before, and only partnered up here because of their shared disdain for the same people – who weren’t connected to the Tag Team Championship in any way whatsoever.

The whole thing made no sense – unless you understand that WWE, like the mainstream media, does things by the numbers.

Seth Rollins’ nickname is the Beast Slayer. Strowman, billed at 6’8″, is often referred to as a Beast.

The number of the Beast is revealed in the 229th verse of Revelation.

Last night, he was 18 days before his 36th birthday:

The team they defeated, Gallows and Anderson, recently adopted the name “The OC”

This episode of RAW was the 1369th in the show’s history:

Braun Strowman’s birth numerology is 117, the gematria of 13, and his birthday is 6/9

Seth Rollins was 9 months, 9 days before his next birthday:

The number of the Beast is revealed in Revelation, which is the 66th book of the Bible.

This episode of RAW, in which Seth Rollins became a double champion, fell on a date with 66 numerology:

66 is the Reduction value of 33, which is the Ordinal gematria of Seth Rollins & Braun Strowman 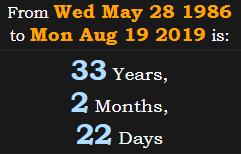