Former Louisiana Governor Kathleen Blanco passed away at the age of 76. Later on in this post, we will see how her death aligns with the current Governor of Louisiana, John Bel Edwards.

She was the Governor of Louisiana during Hurricane Katrina in 2005. 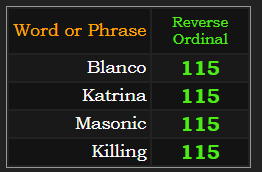 Hurricane Katrina sums to 927, a number of sacrifice

She died a span of exactly 729 weeks after Hurricane Katrina made landfall: 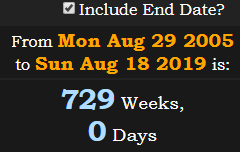 Blanco passed away on a date with 27 and 45 numerology:

She was Louisiana’s 54th Governor
She died of ocular melanoma

Blanco passed away 29 days before the birthday of John Bel Edwards, the current Louisiana Governor:

Her death on 18/8 fell a span of exactly 188 weeks after Edwards took office:

Their names have another strong connection:

News of her death broke a span of 1317 days after Edwards took office:

In Hebrew gematria, total eclipse sums to 227, a very significant number in relation to the circle.

Governor Kathleen Blanco sums to 1,227 in English Extended. Blanco means “white” in Spanish, which is noteworthy because in the same cipher, white sums to 722

Her full name has matching 202 gematria with total solar eclipse

It was 3 months, 19 days after Louisiana’s date of admission to the Union:

Hurricane and Blanco both sum to 146