This fire occurred on a date with Standard numerology of 38

It gets this nickname because of Oliver Hazard Perry‘s flagship. His name has matching Jewish gematria with The Moon

The fire at Harris Family Daycare in Erie was 73037 days after Oliver Perry died:

This matches both Moon and total lunar eclipse

Notice the 68 in Reduction for both phrases? The current Mayor of Erie is Joe Schember, who is currently 68 years old:

The date had primary numerology of 58

The phrase total lunar eclipse also has gematria of 103

The mayor’s name, Joe Schember, sums to 103 in Ordinal, the same as Oakenshield, whose Tweet is shown in the linked article above.

This fire occurred a span of exactly 103 weeks after the Great American eclipse: 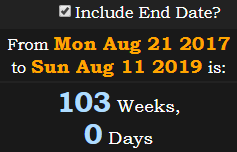 The fire was also 70 weeks, 2 days before the next total solar eclipse:

Tisha B’Av is also called the ninth of Av, which has matching Ordinal gematria with the Extended value of Erie

The city of Erie, Pennsylvania was incorporated in April of 1851, making it 2019 months old:

Joe Schember is the 48th Mayor of Erie.